A wise man once referred to mental disease as; the dark abyss of the mind. A crater of darkness in the brain for which there is no relief. It has been my privilege in life to care about, pray for, and love a number of people who have bravely struggled through this blackened landscape of emotion. Such  devastating diseases of this nature vary in degree as well as intensity for not only the people who live with and love the sufferers, but for the victims themselves. Everything from Postpartum, Bi-polar, anxiety, Obsession,Disassociation, schizophrenia, borderline personality, and attachment disorders have touched the darkness.
The worst part of these diseases is there is no pot of gold at the end of the rainbow. Many people know what it's like to be in pain, depressed, tired and worn out. We also know that when we rest, heal, and "get back on our feet" those sicknesses are temporary. Have you ever imagined how you would cope with those feelings if they never went away?
A dear friend of mine suffers from Dis associative Identity Disorder, formerly known as Multiple personalities. This disorder is formed through extreme trauma at the hands of the most trusted care givers, and at a very young age, before the age of seven. The condition is deepened and worsened with continued abuse and trauma, but before the age of seven experts believe the broken pieces of the mind can be put back together. My friend didn't have the chance to learn what was happening to her until she was in her twenties however, and now she struggles daily, and for the rest of her life. If it's not the paranoia, anxiety, depression, hallucinations, and physical pain. It's the expense of therapists, medication, treatments, and hospitals. The side effects of both the disease, the trauma to her body, and the medications make her life a dark abyss, indeed.
The good news is, she is actually a fabulous cook, an avid hiker, a dog lover, a preschool instructor, and a primary teacher. She loves, laughs, inspires, and sets an example for people like me.
Anyone with chronic disease of any kind knows how easy it is to slip into depression when your body and/or mind betrays your desires to be happy. I was warned years ago that diabetics are prone to depression. After I lost my father, I sank into that very quagmire of darkness with out a fight.
Yet, anyone who knows me now, knows I am severely optimistic. I love life, people, my family, my friends, and my Savior more than anything. It doesn't treat, heal, or eliminate the diseases. It doesn't bring health, rest, or relief. It does bring hope.
"The best medicines are listed as: Love, Laughter, and hope. I will never see this world, my children, my grandchildren, or the ones I love. I hope that one day when I can see, i will. I'm not sure it even matters though.
The hope that keeps me from losing my mind is not to recover what has been lost. It is the hope that nothing is truly lost.
Its not the hope that there will be an end to life and release from pain. It is a hope that life learning will never end, even if it comes with pain.
It isn't a hope that soon it will be over. It is a hope that even though it will never change or get better; I will.
Posted by Unknown at 10:40 AM No comments:

The Right Of Way 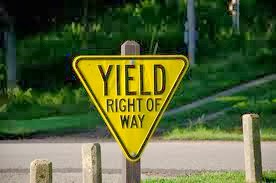 When the front bumper of a car smashed my knees against the bicycle I was walking through the intersection, I was to say the least shocked. I was in a cross walk. The audio signal was indicating it was my turn. It evidently didn't matter though. I was knocked down and my 2 year old son, who was in a bicycle carrier was knocked over as well.
Luckily for both of us, the car had slowed to turn right at a stop light. When the older lady driving checked left but not right, she plowed into me as I crossed in front of her. A frightening experience for my son and I, but I think she was scared too. She jumped from her car, ran around to where we sat crumpled in the road, and began yelling at me for marking the paint on the hood of her car.
As I brushed gravel from my hands and knees, picked up my screaming toddler and dragged the bike out of the intersection, she continued to berate me for crossing the street when she had the right of way. She informed me her son was a lawyer and would be contacting me to pay for the paint job of her car.
I just turned my back on her and walked the bike down the road. She yelled for me to come back so I could give her my phone number, but I ignored her. My son was clinging to me and my focus was on him. My husband later told me I should've gotten her phone number and sued her for running down a blind lady in a cross walk.
It made me feel better certainly, but the truth is; it wouldn't have been the right way.
Often when someone has wronged us, or acted foolishly, our immediate response is to make them pay because they are wrong. In the driver of the car's perception, I was in her way and she was right. I wasn't perfect in my behavior, even though I had the right of way in the situation. I know some of you are asking yourself what a blind lady was doing riding a bike with a baby in tow? I can almost hear you smiling right now!
Life is never as cut and dry as who is right and who is wrong.
Each of us make mistakes. Every one wants to be in the right, but will find them selves on the back side of what "Right" really is.  Instead of worrying about whether or not you have "the right" to behave the way you are acting. Ask your self if you're acting "the right" way. Do you allow others the same mistakes you want others to allow you? Do you judge a group of people based on the actions of a few individuals? Even if your intentions were right, were your attitudes, actions, and understanding accurate? Even if you were "right", would you rather be justified or peaceful?
I learned this lesson from my mother a very long time ago. For a good portion of my young adult years and even before, I wanted to prove to her that I was right, that there were differences between her way, my way, and the right way.
When I stopped trying to prove to her I was right; I discovered we actually agree on a lot of things.If my mother is reading this she's probably shaking her head and wondering if I've had a seizure. You probably don't know you taught me this but you did Mom. Thank You.
This lesson has been invaluable in my life. God's way is "The Right Way". My foolish, mortal, flawed mind can't begin to grasp infinite principals with finite understanding. I don't have faith in God because I'm too stupid to use my own brain to tell the difference between right and wrong. I walk with faith because this planet is occupied by imperfect humans. I trust the only perfect being I've ever known, Jesus Christ.If you're asking yourself if that's difficult not having ever met the man. Its Not. The hard part is doing the work to know, trust, and give my life to Him. With the last 40 years of practice, I know Him. I can't wait to know him better every day. I can't wait to ask him all my weak and mortal questions. Mostly, I can't make it through all the interpretations individual people have of their rights without his love and example to show me the right way.
Posted by Unknown at 10:06 AM No comments:

When The Blind Lady Can See...Be Afraid